About the College of Liberal Arts & Sciences

Butler’s College of Liberal Arts and Sciences attracts and nurtures the kinds of faculty and students who are never satisfied with the status quo. We are a community of wonderful “ands.” Relentlessly ambitious and consistently collaborative. Restlessly curious and grounded in reason. Data-driven and culturally inspired.

The results are just as wonderful as the “ands.” Our graduates are successful in every way they define the term: Engaged in their careers, active in their communities, and continually learning and leading. 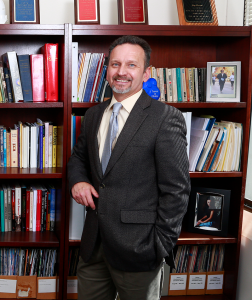 Before joining Butler in 2010, Dr. Howard was with Indiana University–Purdue University Columbus, serving as Interim Vice Chancellor and Dean (2007-2009), Assistant Dean for Budget and Planning (1999-2002), Head of the Division of Liberal Arts, and Professor of Sociology.

Dean Howard’s research interests range from the Scholarship of Teaching and Learning to religion and popular culture.  His most recent book, Discussion in the College Classroom: Getting Your Students Engaged and Participating in Person and Online, was published by Jossey-Bass (2015).

Dean Howard served as Deputy Editor of the American Sociological Association journal, Teaching Sociology (2003-2009). He is a Fellow of the P.A. Mack Center at Indiana University for Inquiry on Teaching and Learning. He served as the 2006-2007 President of the North Central Sociological Association and as an elected member of the Bartholomew Consolidated School Corporation Board of Trustees (2004-2010).