History of the Holcomb Observatory

Astronomy first took root at Butler in the late 1800s when the university was located in Irvington on the east side of Indianapolis. In 1889 Joseph I. Irwin, a member of the Butler University board of trustees from Columbus, Indiana, helped the University obtain its first observatory. It was a small round building made of sheet metal with a dome and an opening through which the 6-inch refracting telescope could view the sky. The 6-inch refracting telescope was purchased from the estate of Robert McKim of Madison, Indiana by Irwin in 1889. The lens was made by Alvan Clark & Sons in 1883 and was originally part of McKim’s personal observatory located near his home. After Butler University was moved to the north side of Indianapolis in 1928, the telescope was dismantled and stored, and the Irvington observatory was torn down. In the 1930s the telescope was repaired and remounted by Will Irwin, the son of Joseph I. Irwin and also a member of the Butler board of trustees. However, during World War II courses in astronomy were discontinued and the telescope was not used until October 1945 when the Math club had the privilege of using it.

In April 1953, Indianapolis industrialist and vice president of the Butler board of trustees James Irving Holcomb and his wife, gave $250,000 to the university for the construction of an observatory as a gift for the university’s centennial celebration. The observatory was intended for public use and student learning. Initially the observatory was supposed to house a 24-inch telescope valued at $30,000 in 1953 dollars, but in October 1953 a larger 38-inch mirror was available and Holcomb jumped at the chance to have the largest telescope in the state of Indiana and the ninth largest in the United States. This raised the cost of the telescope to $48,500 and the total project cost to $325,000. In October of 1954 the telescope was installed by J.W. Fecker, Inc. The telescope and assemblage was shipped to Indianapolis from Pittsburgh by truck. Installation of the telescope in the 50 foot high dome was done by crane (even today a crane must be used to get the 600 pound mirror from the dome to ground level for resurfacing every five years or so).

Governor George N. Craig delivered the dedicatory address and Charles F. Kettering, vice president and director of General Motors Corporation, spoke at the dedication dinner on November 5th 1954. The observatory was placed on a high knoll on the north end of the Butler academic campus, adjacent to the woods of the Holcomb Gardens. The observatory is visible from 38th street and to motorist driving northward on Clarendon Road. Still riding piggyback on the 38-inch telescope was the original and refurbished Clark 6-inch telescope from the Irvington campus.

In addition to the telescope, the observatory has a lobby, clock room, classroom, and planetarium. The lobby is considered by designers as the “showplace” of the building. This is a 14 foot replica of the zodiac dome in brilliantly colored terrazzo on the floor. Ceiling spotlights emphasize the design and colors. A cantilever stairway, also bearing zodiac and planet signs in iron, winds upward to the dome and telescope. Along the stairway and on the landings are 20 lighted cases containing images from telescopes and spacecraft. The planetarium is both a laboratory and theater, used to examine the motion of celestial objects and learn the location and motions of these objects. The entire celestial sphere can be projected, making it look as if you were outside far away from the light pollution of Indianapolis. The day or night sky can be presented, and we can accelerate time and motions of celestial objects to view the past or future.

In 1995, Butler University began the first phases to upgrade the 38-inch telescope. The 5,000-pound telescope was mechanically and structurally sound but was difficult for the observer to use because it had to be moved from target to target by hand. The refurbishment of the telescope was done by AB Engineering of Ft Wayne, Indiana. Slewing motors were added to the telescope so that it no longer had to be moved by hand and to allow computer controlled pointing of the telescope. This refurbishment of the telescope was finished in April 1997. The upgrade made deep imaging possible; celestial objects 6 million times fainter than the human eye can be detected through the Holcomb Telescope. The telescope has been used for both introductory and advanced courses and several student research projects, particularly for determining critical asteroid rotation rates, examining variability of dying supergiant stars, and following transiting exoplanets.

In 2008, Butler University strengthened its astronomy program by joining the SARA consortium, thanks to a donation by Dr. F. Levinson. This consortium of 13 universities possesses three 1-meter class telescopes located at Kitt Peak, Arizona, Cerro Tololo, Chile, and at Observatorio del Roque de los Muchachos in the Canary Islands, Spain. Having remote access to these telescopes has provided Butler students, at all levels and majors, with the unique experiences of being an astronomer and participating in original astronomical research. 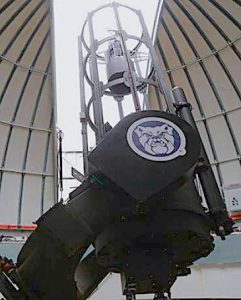 During the last few years the Holcomb telescope and dome of the observatory has once again been overhauled. This $425,000 overhaul is once again possible due to a generous donation by Dr. F. Levinson. Care was taken to keep the original look of the telescope. One of primary items that have been addressed are the optics of the telescope. The primary mirror has had an astigmatism removed, a new 13-inch secondary mirror was fabricated and installed, and a corrector lens/focal reducer has been installed thus reducing the telescope’s focal ratio from an f/16 to an f/6.3.  This reduction of focal ratio makes the telescope a much faster camera and increase the field of view of the telescope seven fold.  The dome now has failsafe mechanisms allowing it and the telescope to be used remotely. One key goal of the refurbishment was to have the Holcomb Telescope operations be identical to those of the SARA telescopes, so now our students can use the same seamless interface when observing. This overhaul was completed by Astronomical Consultants & Equipment, Inc. They have upgraded over 30 telescopes including two similar Fecker telescopes, one for the University of Georgia and one for Agnes Scott College.   Also overhauled was Butler’s first telescope, the Clark 6-inch refractor from the Irvington campus. Its nearly 140-year lens was refurbished and continues to ride piggyback along side the 38-inch telescope.

In early 2018 the planetarium had its old Spitz AP3 star projector replaced with a fulldome digital projector.  The new Digitarium Kappa projector projects more that 4 million pixels onto the dome of the planetarium which gives visitors a fully immersive 3D experience in addition to nicely rendering the night sky. It can show the sky as it was millions of years into the past and future.  The new Kappa projector also allows for flight to the Moon and planets, and through and out of the Milky Way galaxy.  The combination of these two upgrades provides students, faculty, and visitors with a unique astronomical learning experience.

Though the equipment has been upgraded the observatory still retains its 1950s charm, particularly when entering the lobby. Visitors are still greeted with a beautiful terrazzo floor with the inset zodiac symbols, the star burst chandelier, and tall frosted windows. The telescope stills retains its classic 1950s look, and riding piggyback on the main telescope is Butler University’s first telescope dating back to the 1880’s.