History of the Butler Bulldogs 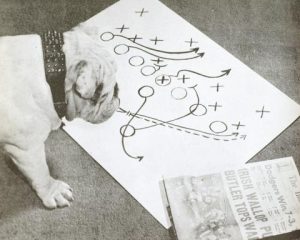 Prior to 1919, Butler’s athletic teams were known as the “Christians,” but numerous losses in the 1919 football season caused Butler’s followers to grow weary of the nickname. During the week leading up to Butler’s game with the heated rival Franklin “Baptists,” Butler Collegian editor Alex Cavins and his staff, which included cartoonist George Dickson, decided something “hot” must be conceived for the school’s weekly pep session.

About that time, the mascot of a Butler fraternity – a bulldog named Shimmy (you couldn’t shake him), wandered into the Collegian office. An idea was born. The next school paper came out with a big Page One cartoon showing Shimmy the bulldog, labeled “Butler,” taking a bite out of the seat of the pants of a figure labeled John the Baptist. The caption was: “Bring on That Platter, Salome!”

Butler lost the game to Franklin, 14-0, but the name “Bulldogs” stuck.

By default, Shimmy was the first “Butler Bulldog” mascot at Butler in 1919 thanks to his timely appearance in the Butler Collegian office on that fortuitous fall day. He was actually preceded by a few bulldogs, bull terriers, and boxers associated with Butler teams as far back as 1906.

Shimmy was also followed in duty by a number of unofficial-official live English Bulldog mascots kept by Butler students, fraternity members, and even parents of student-athletes. The list includes the likes of Butler Sam, Butler Mike, and Butler Bill.

The presence of a live “mascot” was a tradition that eventually faded in the 1970s. Then, in 2000, representatives in the University Relations department convinced Butler officials to adopt an English bulldog to serve as the official mascot, as chronicled by Anthony Schoettle in the Indianapolis Business Journal.