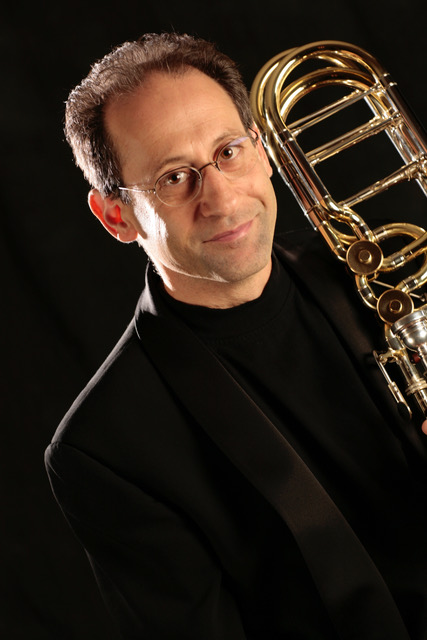 JARED RODIN came to Indiana from Chicago, where he had been a student of Frank Crisafulli and Arnold Jacobs to earn the MM degree from Indiana University,studying with Keith Brown and Lewis Van Haney. He earned his BM from Southern Illinois University at Carbondale under the tutelage of Gene Stiman, William E.Bootz and Mel Jernigan of the St. Louis Symphony. Jared also counts Michael Mulcahy and Charlie Vernon as mentors.

Active as a clinician and soloist, Jared has commissioned and premiered many works for the bass trombone including “Morph” (1993 Indianapolis Chamber Orchestra) by Ken Kugler, “”DIAX, in Two Parts” (2008) by Frank Glover, “Beneath the Surface”(1997) by Steve Allee and another “Concerto” (1998) by Stan Adams. Jared has presented concerts of music for trombone and strings with the Indianapolis String Quartet at the Indianapolis Arts Garden. He has presented concerts and been clinician at the Cincinnati College-Conservatory, University of New Mexico, Hochscule fur Musik in Trossingen, Germany and Northwestern University and Indiana University.

Additional works have been premiered in Europe including “Remembrance” and “Welcome to the Skeleton Circus” by Frank Glover, and others with the Seraphim Trombone Quartetat the A-DEvantgarde Festival in Munich, Germany. Another work, “Adrenaline”,by William Kleinsasser was performed at the 2005 Florida Electro-AcousticFestival.

Jaredis Adjunct Professor of Trombone at Butler University, having held similar positions at Ball State and Purdue Universities. Jared has been guest lecturer at Beinen School of Music, Northwestern University 2000-01 and, as a sabbatical replacement, at the Jacobs School of Music, Indiana University in 2004, 2011, 2014/15 and 2016/17.

Jaredis a principal in Wood & Rodin, Inc., a musical services company, that assists clients in the publishing industry, individual artists and other entertainment entities through the performance and recording process with budgeting, scheduling, talent management and payroll and other functionary responsibilities.