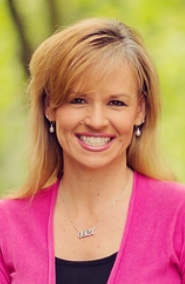 Dr.Julie M. Koehler was born and raised in Madison, Indiana.  Valedictorian of her high school class, she graduated from Madison Consolidated High School in 1991.  She attended college at Purdue University in West Lafayette, Indiana.  A student-athlete, she was a member of the Purdue University Women’s Golf Team in 1991 and 1992 while majoring in pre-pharmacy. Following acceptance into the pharmacy program at Purdue, she consistently earned Dean’s List honors and was inducted into the Rho Chi Pharmaceutical Honor Society.  Dr. Koehler earned her Doctor of Pharmacy (Pharm.D.) degree from Purdue University in 1997.  Following graduation from Purdue, she completed an American Society of Health-System Pharmacists (ASHP)-accredited Pharmacy Practice Residency at the Indiana University Medical Center (IUMC) in Indianapolis.  Upon completion of her residency training at IUMC in 1998, Dr. Koehler accepted a co-funded position in Indianapolis with Clarian Health Partners as a Clinical Pharmacist and with Butler University as an Assistant Professor of Pharmacy Practice in the College of Pharmacy and Health Sciences (COPHS).

During her career as a clinician-educator, Dr. Koehler served at Clarian (now Indiana University Health) as both an inpatient clinical pharmacist at Methodist Hospital from 1998 to 2009 and as an ambulatory care clinical pharmacist at the IU-Methodist Family Medicine Center from 1998 to 2004 and with the IU Health Transition Clinic from 2012 to 2017.  For the Department of Family Medicine, she served an instructor for both medical residents specializing in Family Medicine, as well as medical students from IU.  Throughout her time as a clinical pharmacy specialist at Clarian, Dr. Koehler helped to establish and oversee numerous pharmacist-run clinical services, including an anticoagulation clinic, a dyslipidemia clinic, a pulmonary education program, a smoking cessation program, and a patient assistance program, for the IU-Methodist Family Medicine Center.  In 1999, she also established a post-graduate year 2 (PGY-2) pharmacy residency program with a dual focus in Family Medicine and Academia, and she served as the director of that program until 2008.  While working with the Department of Family Medicine, Dr. Koehler was an active participant in clinical research, and she served as a member of the ALLHAT (Antihypertensive and Lipid-Lowering Treatment to Prevent Heart Attack Trial) Collaborative Research Group, which was responsible for conducting one of the largest and longest-running antihypertensive studies ever sponsored by the National Institute for Health (NIH) and the National Heart, Lung, and Blood Institute (NHLBI).

Throughout her career with Butler University, Dr. Koehler has received numerous awards as an instructor in the College of Pharmacy and Health Sciences, including the Outstanding Pharmacy Practice Professor Award (2001, 2003, 2004, 2007, 2009), the Board of Visitors Award of Excellence (2003), and the Mortar Board Teacher of the Year Award (2005).  In addition to teaching pharmacy students, pharmacy residents, medical students, and medical residents, Dr. Koehler served as a volunteer instructor for the Indiana University School of Dentistry from1998 until 2008. Dr. Koehler has given numerous invited presentations at local, state and national levels. She has also presented internationally. She has served as a volunteer instructor for both the American Lung Association of Indiana and the American Lung Association of Ohio and as well as a member of the Indiana Asthma Alliance and the Indiana Joint Asthma Coalition (InJAC) for the Indiana State Department of Health. She has been an active member of several professional organizations throughout her career, including ASHP, the American Association of Colleges of Pharmacy (AACP), the American College of Clinical Pharmacy (ACCP), and the Indiana College of Clinical Pharmacy (ICCP), and in recent years, she has established membership within the Physician Assistant Education Association (PAEA).  Dr. Koehler served as President of ICCP in 2003-2004, and she was the first person to hold the title of Recruitment Chair for that organization in 2002.  As a result of Dr. Koehler’s recruitment efforts during that year, ICCP was awarded national recognition by ACCP as the State chapter with the most significant growth in membership.  Dr. Koehler served as the national Network Facilitator for the Section of Primary Care within ASHP’s Section of Clinical Specialists and Scientists from 2003 to 2005.  In 2006 and 2007, Dr. Koehler was invited to be one of ten national experts in the field of Ambulatory Care to serve on the national Ambulatory/Primary Care Pharmacy Role Delineation Study Task Force for the Board of Pharmaceutical Specialties (BPS).  The work of that task force ultimately resulted in the establishment of a national board certification exam and credential for ambulatory care pharmacy specialists (i.e., the Board Certified Ambulatory Care Pharmacist, or BCACP). Dr. Koehler also served two consecutive terms as a non-specialist memberof the Psychiatric Specialty Council for BPS from 2006 through 2012.

In 2003, Dr. Koehler was promoted to Associate Professor and appointed as Chair of the Department of Pharmacy Practice.  In 2004 and 2005, she completed a Fellowship in Academic Leadership through the American Association of Colleges of Pharmacy (AACP).  As Chair of the Department ofPharmacy Practice from 2003 to 2011, Dr. Koehler built and led one of the largest academic departments (including more than 50 full-time faculty, staff, residents, and fellows) on Butler University’s campus.  In 2007, Dr. Koehler was recognized locally for her accomplishments by the Indianapolis Business Journal (IBJ) as one of the Forty Under 40.  In 2010, Dr. Koehler was promoted to the rank of Professor at Butler University.  That same year, Dr. Koehler appeared as an expert panelist alongside two physicians on the Discovery Channel for the Discovery Health Continuing Medical Education (CME) segment, “Hormonal Therapy Options for Contraception and Menopause.” Notably, she was the first non-physician panelist to appear on the nationally televised continuing medical education series.  During a celebration of national Women’s History Month in 2010, Dr. Koehler was honored with a Professional Woman’s Achievement Award by the U.S. Department of Defense, Accounting, and Finance Services (DFAS).   Also in 2010, Dr. Koehler was awarded Fellow status by the American College of Clinical Pharmacy (the highest honor that the College can bestow upon its members) in recognition of her demonstration of a sustained level of excellence in clinical pharmacy practice and research.  In 2011, Dr. Koehler was promoted to a newly created administrative role within the College of Pharmacy and Health Sciences at Butler.  As Associate Dean for External Affiliations, Dr. Koehler handles external affiliations on behalf of the college as they relate to clinical practice and experiential education, and she is focused on establishing, developing, and maintaining experiential learning sites for both the pharmacy and physician assistant programs within COPHS.  In 2014, Dr. Koehler was honored as the recipient of the Indiana College of Clinical Pharmacy Tisdale Pharmacy Professionalism Award.  In 2019, Dr. Koehler was honored by Butler University with the Provost's Award for Excellence in Academic Achievement for Community Partnerships.

In addition to her administrative duties at the college, Dr.Koehler remains an active teacher, clinician, and scholar.  Since the time of her hire in 1998, Dr. Koehler has continued her clinical work at IU Health as the pharmacist for the Pulmonary Rehabilitation Program at Methodist Hospital.  As a member of the pulmonary rehabilitation team, she continues to provide medication education on a monthly basis to patients with obstructive and restrictive lung diseases, as well as patients with cystic fibrosis and pulmonary hypertension who have been enrolled in the Pulmonary Rehab Program.  She has published numerous articles in peer-reviewed journals and chapters in books, and she has served as co-editor and author for the seventh, eighth, ninth, tenth, and eleventh editions of the Pharmacotherapy Casebook:A Patient-Focused Approach, a companion casebook to the textbook, Pharmacotherapy: A Pathophysiologic Approach (DiPiro et al; published by McGraw-Hill Medical), that is widely used by pharmacy and nursing schools throughout the country as well as internationally.

Dr. Koehler is married to Brad Bowman (originally of Jacksonville,Florida), Principal of Core Finance Team, and the couple resides in Fishers, Indiana with their two daughters, Lauren (age 12), and Allison (age 9).