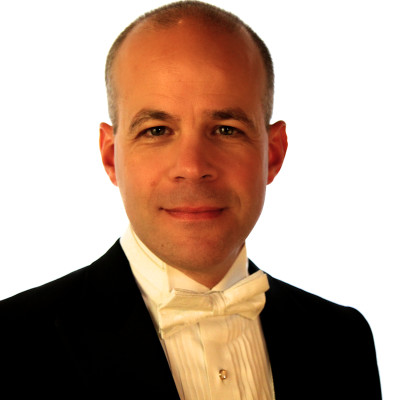 In a dynamic career that combines performance, scholarship and collaborative leadership, conductor Eric Stark has established himself as a choral-orchestral specialist. In May 2016, he conducted the Chinese University of Hong Kong Chorus in a highly regarded performance of concert entitled "Our Spirit, Our Love, Our Joy" in the Hong Kong Cultural Centre Concert Hall. In May 2012, Stark led over 300 musicians in an acclaimed performance of the massive Grande Messe des Morts (Requiem) by Hector Berlioz with the Indianapolis Symphony Orchestra, the Indianapolis Symphonic Choir and the Butler University Chorale (“The discipline of the choir’s preparation was evident from the start….the ‘Dies irae’…is one of the most thrilling episodes in the chorus-orchestra literature, and Stark managed it with aplomb.” Indianapolis Star). He made his podium debut as guest conductor of the Indianapolis Symphony Orchestra in a 2008 presentation of Handel’s Messiah(“galvanic performance….the Choir sang excellently throughout.” Nuvo Newsweekly). His December 2007 Washington, DC debut with the Washington Chorus was also met with critical and popular acclaim (“Eric Stark had the chorus singing crisply and brightly….its rich, close harmonies shimmering.” Washington Post).

In 2012, Stark served as chorus master for the Super Bowl XLVI halftime show, featuring Madonna, Cee Lo Green, Nicki Minaj and LMFAO. He was honored with a Creative Renewal Fellowship from the Arts Council of Indianapolis in 2005. A firm believer in the power of music to connect diverse audiences and enrich lives, Stark has led a revitalized program of innovative educational outreach programs since joining the Indianapolis Symphonic Choir in 2002. In-Choir-ing Minds is an interactive discussion/performance featuring engaging dialog interspersed with live musical examples. Hallelujah—What’s It to Ya?! is a light-hearted musical inspection of the greatest musical work of all time, Handel’s “Hallelujah” chorus. The in-depth Choral Colloquium focuses on the contextual issues surrounding the great works for chorus and orchestra, and has featured such notable participants as composers Morten Lauridsen and Kyle Gann, scholar/performers Vance George, John Shirley-Quirk, Nick Strimple, Byron Adams and R. Larry Todd, and theologians Richard Hamilton and Frank Burch Brown.

In addition to his duties as Artistic Director of the Indianapolis Symphonic Choir, Stark is also Director of Choral Activities and Professor of Music of the School of Music at Butler University’s Jordan College of Fine Arts. There he leads the graduate program in choral conducting, conducts the Butler Chorale, and teaches graduate and undergraduate conducting and choral literature. His former conducting students have received appointments at leading choral positions around the United States, including Stetson University, Princeton University, San Francisco Girls Chorus, Los Angeles Opera, Transylvania University, Fort Wayne Children’s Chorus and the University of Wisconsin. In 2003 and 2009 he taught a Butler University honors course he designed, Putting Wings on Dreams—the First 100 Years of Powered Flight, using the dramatic stories of aviation pioneers as case studies in human determination and innovation. He has served on the faculties of Christian Theological Seminary, Indiana-Purdue at Fort Wayne and Earlham College. He received the doctoral degree in choral conducting from Indiana University, where he was a student of Jan Harrington, Robert Porco and Thomas Dunn. He is a 2014 Sagamore of the Wabash, the state of Indiana's highest civilian honor. A 1988 graduate of Wabash College, he is also a volunteer pilot for Angel Flight, a non-profit network of pilots providing free air transportation for those with medical needs.